28th March
Received Malaysia Book of Records (MBR) Award as " Youngest To Swim The Longest Distance" in the achievement of swimming across the Straits of Malacca from Indonesia to Malaysia in the distance of 60km with the time of 22 hours 55 minutes at the age of 12 years old. My sister Zahra (18 years old) also received MBR Award as1st "Female To Swim The Longest Distance" with the time of 23 hours (a new record set from the previous record of 24 hours). This event is one of the 5XOE (5 Extreme Ocean Expedition) project towards Malaysia-Indonesia Nusantara Unity mission 2010. 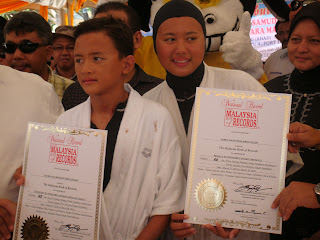 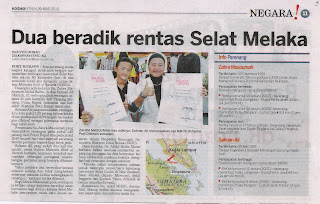 Kosmo 29/03/2010
*Thanks to Perak Chief Minister and Government for the support in our mission including Uncle Sunny Ooi and Agel members (local and abroad) for providing Agel nutrition products that we consume during training and event. 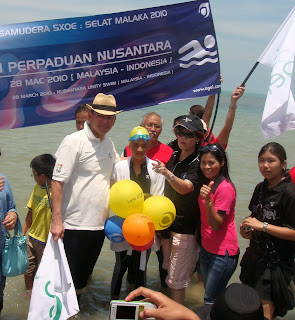 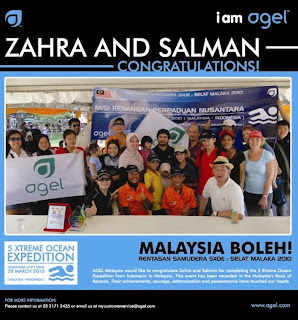 24th April
Invited to give short presentation talk during Agel meeting sharing my experience with audience on my Straits of Malacca swim achievement at Hilton Hotel, Petaling Jaya. 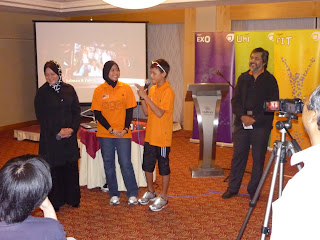 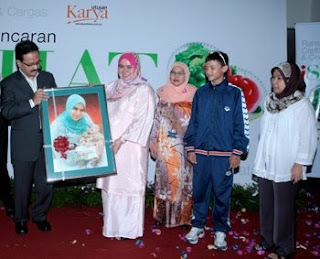 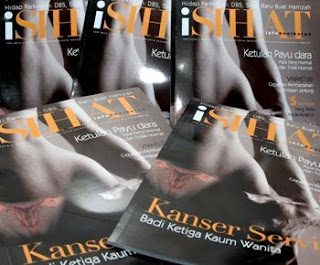 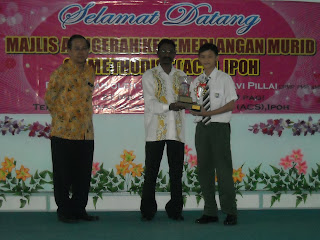 My School Principal (left), VIP guest (Centre) and me (right) 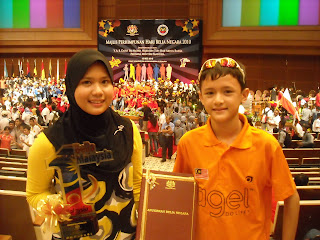 30th May
My 13th Birthday celebration within family circle. 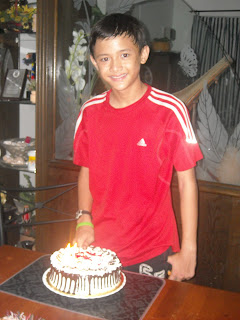 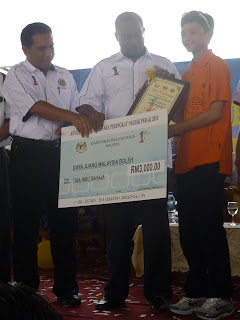 18 July
Raced in Ipoh International Run 2010 in 21km distance of adult open category. Finished under 2 hours (1 hr 58 mins) with medal and certificate. This was my sixth time I took part in the event since 2004 when I was only 7 years old. My younger brothers Iman age 7 and Firman age 6 also participated in the same category and completed the 21 km run in 3 hrs 32 minutes. Now Firman already beat my record in the run being the youngest participant in 21 km run and also beat my swim record being youngest to swim in Dindings Straits with a distance of 5 km at the age of 5 (my first swim was 1.2 km at the age of 6). We didn't have the money to place our achievements in Malaysia Book of Records unless someone sponsor us. 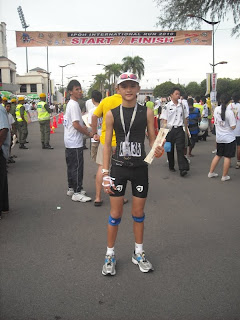 Showing my medal & certificate of completion 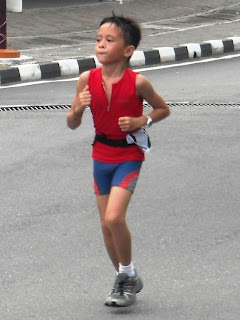 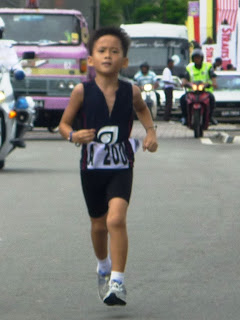 24 & 25 July
Participated in Port Dickson International Triathlon 2010 for the second time since 2008. First day is my leisure race in Kids Triathlon. Second day is my real event in the 1.5km swim, 40 km bike & 10 km run of the Olympic Distance in above 16 years age category. I was the youngest participant so far at the age 13 (my first race was age 9 of the same distance). My best time was 2 hr 44mins not bad for a kid. My bike speed already improved averaging 37-40 km/hr. 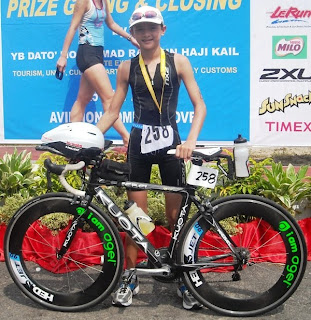 Posing with my sponsored bike after the race

1st August
Participated in the Perak 160 km Century Ride 2010 and finished in 6 hours 19 minutes as the youngest participant aged 13 out of approx 700 adult participants. It was a tough ride for me with at least 20 rolling sections (uphill & downhill) and both my legs were aching! b’cos 2 weeks ago I took part in 21km run, then last week took part in 2 Triathlon events at PD and didn’t give my legs a rest. I remember in Penang Island 80 km ride on January 1st this year, I was only 12 years then, but it was my best when I arrived top 3 (out of approx 800 riders) after a winding uphill course with dangerous downhill curves, yet many adult riders even using mountain bikes couldn’t climb up the steep section. But one thing in common of these two events (Perak and Penang ride) is that, a lot of riders panicked when they saw me passed them. They shouted loud to the rest “Woi, even a kid can pass me!” (Woi! Budak pun boleh potong aku!), so they try to catch up with me and I sort of challenge and motivation to them. “Remember, what adults can, kids can do too!” 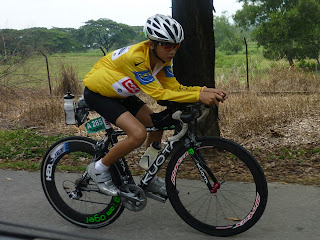 Ride in aero position during the event 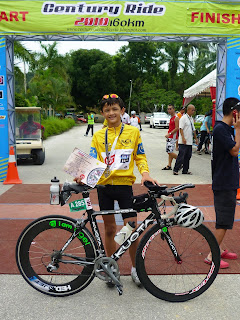 Showing my Medal & Certificate of Completion

2nd & 3rd October
Participated in Desaru Long Distance & International Triathlon, Johore 2010. This is the third time since 2008 (11 years old) and 2009 (12 years old) raced in the 2 km swim - 90 km bike - 21 km run being the youngest participant. In this year event, my finishing time was 7 hours 10 minutes, went slightly more than last year (7 hours) b'cos of my running shoes was giving me some pain at the foot. Second day, I took part in the event for the 2nd time since last year. My younger brother, Iman (8 years old) also took part in the Kids Triathlon event.

Raced in Powerman Malaysia 2010, Lumut Perak in Sprint Duathlon Category of 5 km run - 32 km bike - 5 km run. My 4th time in this event since 2006, 2007 and 2009. My younger brother Iman, aged 8 years, broke my record being the youngest athlete to compete among adult participants.

My youngest brother Firman aged 6 years made the national headlines in Berita Harian & Utusan Malaysia press on 20 th December 2010, being the youngest swimmer to swim the longest distance in the country with 10 hours of non stop swimming. The swim in Sungai Dindings salt water of more than 1 km wide which is a part of Selat Dindings, starts from Lumut Naval Base Main Gate to Raja Permaisuri Bainun Bridge then u -turn and back which is about 15 km . But the actual swim distance covered by Firman is 18 km. He wiped off my record in Selat Dindings when I was 6 years in 2004 doing 1.2 km swim and 8 years in 2006 doing 8.9 km swim. The biggest challenge in Selat Dindings river is strong currents and plenty of jelly fish! I know b'cos I've done 40 times swimming there. I am proud of my brother b'cos I know he's brave & a very strong willed person, he can endure the pain going thru bad weather and choppy waters, jellyfish stings, strong currents and long hours of swim. I was his guide on kayak during the swim. 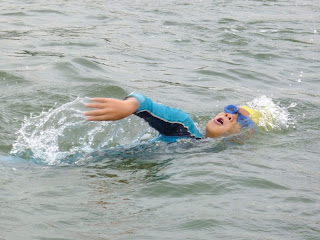 At last after our long hardship throughout the years & being a strong family unit involving in various sports and community activities for nation towards God finally paid off after receiving the "Anugerah Sukan Untuk Semua" (ASUS) 2010 National award by Sports and Youth Ministry in the 'Active Family' category at Putrajaya International Convention Centre (PICC) Selangor. 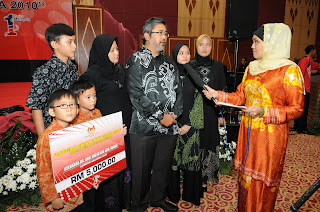 Took part in the Putrajaya Triathlon for Kids with my younger brother Iman and Firman. This is a Sprint triathlon and I emerged 1st in the age 13 - 15 years category.